Caring for your senior cat 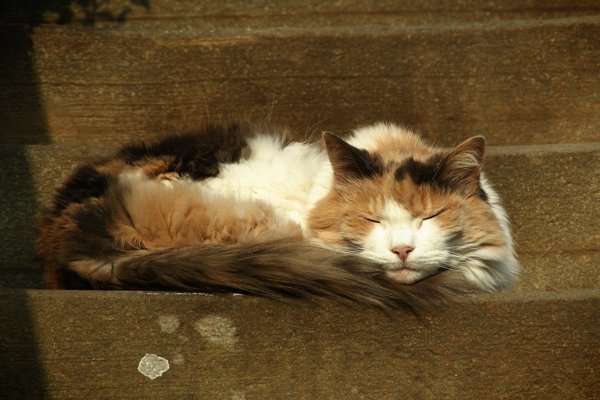 We believe that cats deserve “birth to retirement” healthcare - and that means we need to be on the ball to help them out as they start to get older. While there’s no perfect way to calibrate a cat’s age in human terms, it’s generally accepted that a cat aged 3-6 years old is in their prime while from ages 7-10 they have entered a more ‘mature’ stage. Since their bodies age about four times faster than ours, a cat in this ‘mature’ stage, would be equivalent to a human in their late 40’s and 50‘s. Cats who are 11-14 years old will qualify as ‘seniors’ (about 70 years old in human years) and those beyond 15 years can be identified as ‘super seniors.’  From the ‘mature’ stage upwards, it’s important to take a bit more care of your feline friend, and make sure there aren’t any problems developing.

Now days with high quality diets and health care available it is common for cats to live well into their late teens as beyond. As they age, we do find more and more health problems cropping up. This is largely because of “wear and tear” on organs and tissues, but as a result, the older cat’s body and mind tend to be less adaptable, less efficient, and less resilient. There are certain conditions we tend to see far more commonly in older cats, especially…

Chronic Kidney Disease is one of the most common diseases of old age in most felines (including exotic species such as the big cats). In most cases, the exact cause is “idiopathic” or uncertain, although there are some known risk factors. These include Polycystic Kidney Disease (a genetic condition), infections, certain toxins, and salt imbalances (especially potassium and calcium). Sadly, it is very common in older cats, with up to 50% of cats over 15 years old showing clinical signs.

The symptoms, however, may not appear immediately - a cat has to have lost well over 50% of their functional kidney tissue before they appear. Initially, symptoms are likely to be mild, especially increased thirst and urination. Over time, however, the disease will progress, and more advanced symptoms such as weight loss, loss of appetite, muscle weakness, vomiting, and bad breath appear. Eventually, this may progress to seizures, coma and death if not treated.

As with any other animal, the older a cat is, the more chance that they will develop an abnormal growth of cells - a neoplasm, tumour, or cancer (as it is commonly referred to by most of us). This group of diseases is characterised by cells that divide too rapidly and don’t respond to the body’s normal control mechanisms. These can present initially as lumps and bumps in or under the skin; however, a large number of other forms may be internal and difficult to detect. Tumours may be benign (growing but not spreading) or malignant (invading other tissues), but it’s often impossible to say which is which without further testing, which we can usually do in-house.

Common symptoms (as well as obvious growths) include weight loss, vomiting or lethargy.

Cats are at a relatively high risk of developing an overactive thyroid (hyperthyroidism). The main thyroid glands are found in the neck, and disease will often cause one of them to become enlarged (goitre), producing an excess of the hormone thyroxine. However, hyperthyroidism can also occur without a goitre, for example, if “ectopic thyroid tissue” becomes diseased - studies put the risk of this at between 1 in 5 and 1 in 20.

Thyroxine controls the body’s metabolic rate, and therefore cats with hyperthyroidism usually show classical symptoms such as becoming very hungry, very thin, and very active, basically their metabolism is in ‘overdrive’. In many cases, they will be “manic” or “kittenish”, lose weight fast even though they eat well, have a poor coat quality, and sometimes diarrhoea or vomiting. If untreated, hyperthyroidism often leads to heart disease, blood clots, and death, but treatment is usually very effective and can be curative.

Cats develop Osteoarthritis  (OA) as well and is in fact signs can be found in up to 90% of cats who are 12 years or older. However, they are much better at hiding the symptoms than we humans are, and so the subtle changes can often be misidentified as “old age” rather than pain. Common signs include a reluctance to jump or climb, difficulty using the litter tray (because squatting is painful), general “grumpiness”, and increased time spent resting or sleeping. There are a wide range of treatment options available, so please do talk to us about this - many arthritic cats have a very poor quality of life despite loving owners, until the disease is diagnosed and treated.Use this really neat checklist to see if your cat could be suffering from OA.

So what can be done about caring for your Senior Cat?

Bring your cat in for their regular six-monthly check-ups. This isn’t just about a ‘jab’ it is so we can examine them fully and keep a close eye on your cat for any of the signs mentioned above. If you notice any of these or any other unusual behaviours or activities - bring them in to see us so we can check them out before a minor problem becomes a major one! Many of these conditions can be managed more effectively if diagnosed early.

In fact, additional health checks and yearly screening blood and urine samples are built-in to our Senior Cat Health Plans - see how you can save money while giving your cat the very best care here.

Keeping your cat healthy isn’t just about spotting disease though - older cats have fewer reserves, and so preventative treatment and “good healthy living” are increasingly important. In practice, this means:

Older cats are often more rigid in their patterns of behaviour, so try not to make too many changes. Bear in mind too that osteoarthritis is badly underdiagnosed in cats, so it’s often worth making some adjustments on the “just in case” basis. In particular, think wider, shallower litter trays (easier to get in and out of), ramps (to help them get to a safe high place without too much strain), and (an easy one this!) plenty of warm, draught-free places to doze where older limbs won’t get chilled.

An older cat will live a long and happy life, as long as we make sure we’re there to give them a helping hand when needed. If you have any queries about your cat’s health, do make an appointment to see us; and we strongly recommend 6-monthly checkups for our older patients.