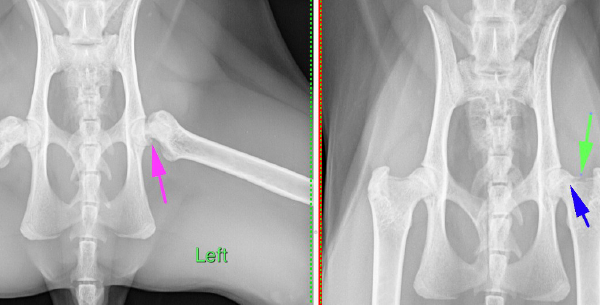 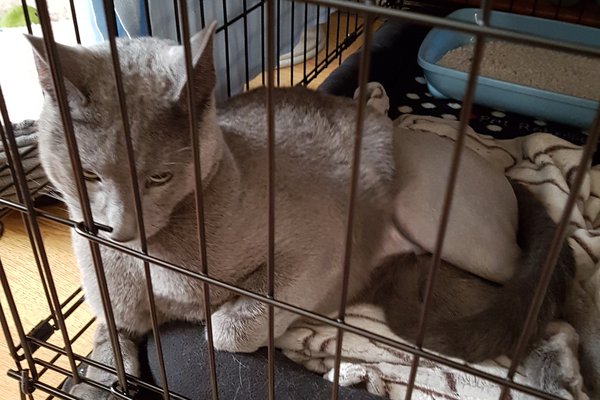 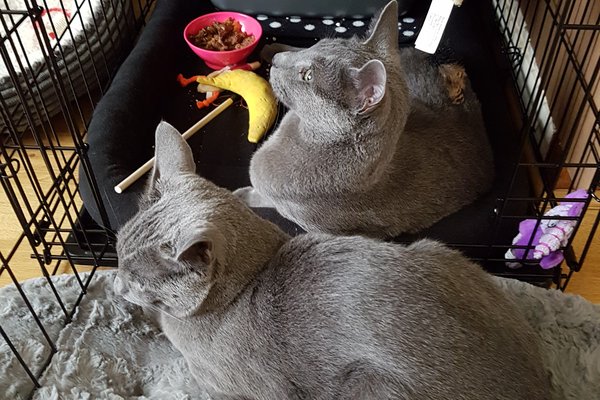 Brave Cat of the Month

Loki is a gorgeous 1 year old Russian Blue, he was brought in to see Dr Jeremy as his owners were a little concerned as he seemed a bit lame, he had been trying to jump and couldn’t as he was wobbly on his back leg.  He was also a little painful when he was picked up.

At the appointment Dr Jeremy determined he had pain in his left hip and decided to give him some anti-inflammatories and recheck after a few days rest to see if it had resolved.  The medication while improving the lameness and pain did not make it go away and Loki still seemed in pain.  At this stage we decided that examination under general anaesthetic and x-rays of the hips, hindlegs and spine were required to see what was going on.

When Loki came for his day procedure his brother came along to spend the day with him for moral support and cuddles.

The hip joint is made up of the ball (femoral head) and socket (acetabulum). The x-rays below show that the left femoral head (purple arrow) has moved from its attachment to the femur (thigh bone), the blue and green arrows show a mottled, irregular appearance of the femoral head and neck. Loki was diagnosed as having Physeal Dysplasia with Slipped Capital Femoral Epiphysis or more simply a non-traumatic fracture of the femoral head. This condition occurs generally in neutered teenage male cats. Siamese cats, Maine coon cats, and Domestic Short Haired breeds are predisposed and many cats are overweight  (this is not the case with Loki!)

To fix this we brought in an Orthopaedic surgeon who came in to do a Femoral Head and Neck Excision which involves removing the painful femoral head and neck and allowing the cat to form a ‘false’ joint over the next few weeks. The vast majority of cats do incredibly well with this condition and surgical intervention.

Loki was the purrfect patient so we are pleased to name him our first Brave Cat of the Month!!